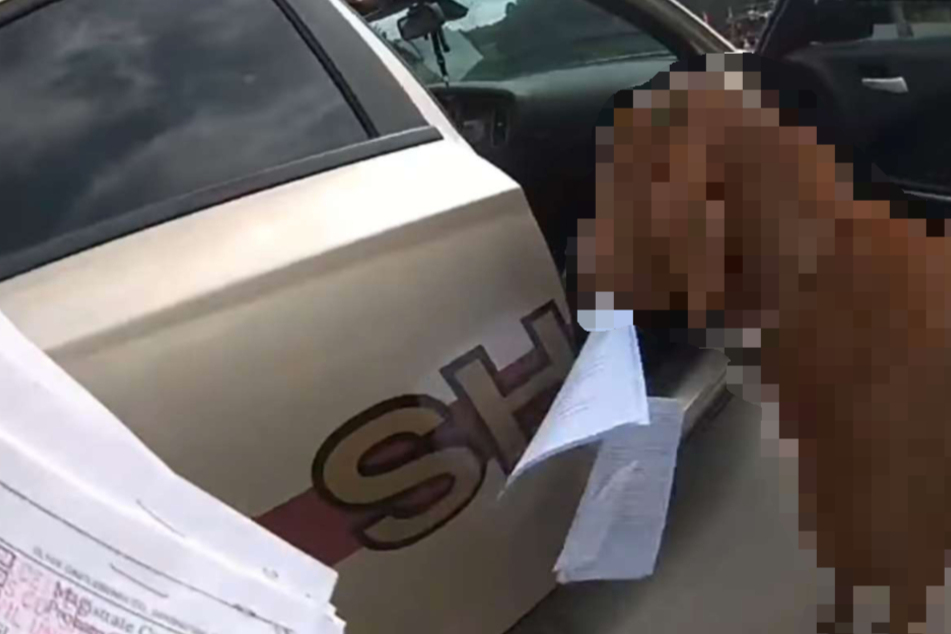 The goat ate my homework! Deputy struggles to get hungry goat out of patrol car

She knew exactly what would happen when she saw the goat next to her car.

Douglas County, Georgia - What began as a routine call ended with a police officer having to force a hungry goat out of her patrol car.

The deputy sheriff had an idea of what might be coming next.

She was out on a house call and waiting on a porch when she noticed something. In the video taken with her body cam, she suddenly mutters "I hope that goat don't get in my car."

As she returns to her vehicle, we see exactly what she was talking about. A large, brown goat had indeed gotten into her car somehow – and it was very hungry. By the time the deputy found this unwelcome passenger, it had already started on a snack: the official police documents lying on the front seat.

The video posted by Douglas County Sheriff's office on their Facebook account shows the deputy trying to drive the animal out of patrol car by shouting "Go, get out" and "Get lost." The goat just bleats and continues to chew the papers.

After yelling proves ineffective, the deputy sheriff also tries hitting the goat on the behind or pulling it out by the horns. No matter what, it refuses to leave its lunch behind.

Only when the deputy pulls the papers out from under the goat does it finally leave. But the battle isn't over yet. The two continue to struggle over the official forms that the animal is currently munching on. The scene is completed by a couple of neighborhood dogs who run over and start barking. The deputy eventually manages to snatch victory from the jaws of the goat, but she does get knocked over at the end for her troubles.

According to the Facebook post, no one was harmed by the goat. The post also explains just how the intruder was able to get into the patrol car: "The deputy explained that due to the number of houses she visits daily, she routinely leaves her vehicle's door open because she has had to retreat on a number of occasions from vicious dogs."

The video didn't just make the deputy's coworkers laugh. The Sheriff Office's already has over 10,000 likes and more than 1,200 comments.

Thankfully, the sheriff's office thought this run in with a goat was funny enough to share. The post ends with, "At the end of the day, we all had a bit of a laugh and we hope you do too!"