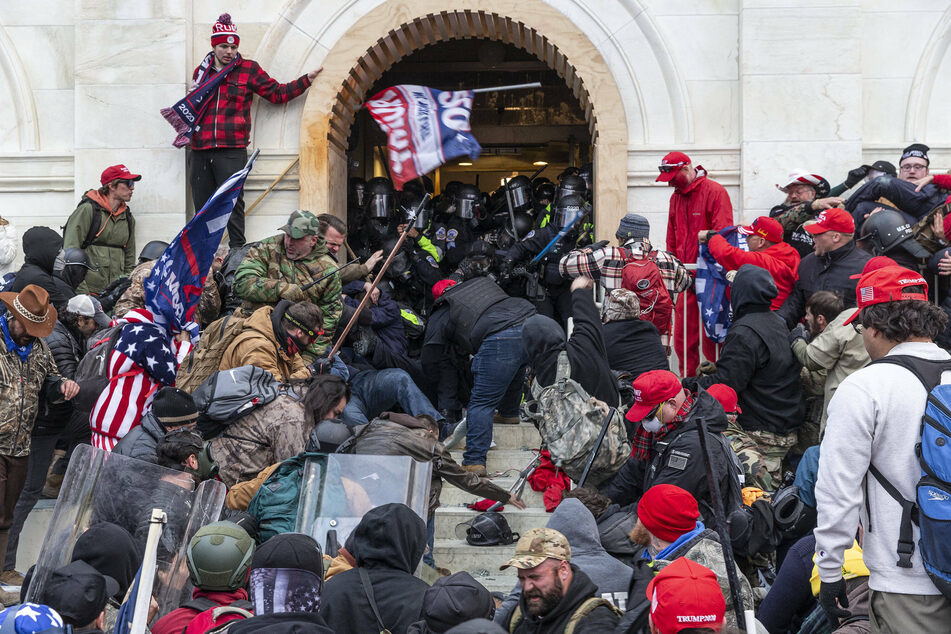 Two US Capitol police officers are suing former President Donald Trump for the physical and emotional injuries they suffered in the deadly January 6 attack.

Washington DC - Two US Capitol police officers who defended the Capitol building against a mob of rioters are suing former President Donald Trump for the physical and emotional injuries they suffered in the deadly January 6 attack.

Officers James Blassingame and Sidney Hemby were punched, pummeled, and threatened by insurrections who broke through police barricades and stormed the Capitol at the behest of the former president, according to the suit filed Tuesday in Washington DC federal court.

The lawsuit is the first filed by Capitol Police officers against the former president.

Hemby, an 11-year veteran of the force, was crushed against the doors of the Capitol’s east side entrance just after 2 pm as rioters tried to shove their way into the building, the lawsuit said.

"(The) insurrectionists continued to scream, 'Fight for Trump,' 'Stop the Steal,' and various other slogans, as they struck him with their fists and whatever they had in their hands," the suit said. "Things were being thrown at him, and he was sprayed with chemicals that irritated his eyes, skin, and throat."

"He was bleeding from a cut located less than an inch from his eye. He had cuts and abrasions on his face and hands and his body was pinned against a large metal door, fending off attacks. His primary focus was to survive and simply get home," the suit continued.

As Hemby continued to fend off the mob outside, Blassingame, a 17-year Capitol Police veteran, heard that the rioters had climbed through the windows, the suit said.

Blassingame ran towards the Crypt, located directly below the building’s Rotunda, just as the area began to fill with a sea of Trump supporters who struck him "in his face, head, chest, arms, and what felt like every part of his body."

"(They) used their fists and had weapons that ranged from flagpoles to stanchions and building directional signs," the lawsuit read. "For the first time in his life, people were yelling into his face, calling him a "n*****" repeatedly and throughout the attack in the Crypt. He lost count of the many times the racial slur was hurled at him."

US Capitol Police Officer Brian Sicknick later died after a Trump supporter doused him with chemical spray during the riot. Two men have since been charged with assault, though prosecutors have still not ruled out murder charges.

The riots came just hours after Trump made a speech near the White House urging supporters to march on the Capitol as Congress began certifying the results of the 2020 presidential election.

"They rigged it like they’ve never rigged an election before," he told the crowd. "We will never concede, it doesn’t happen. You don’t concede when there’s theft involved. Our country has had enough ... We will stop the steal.