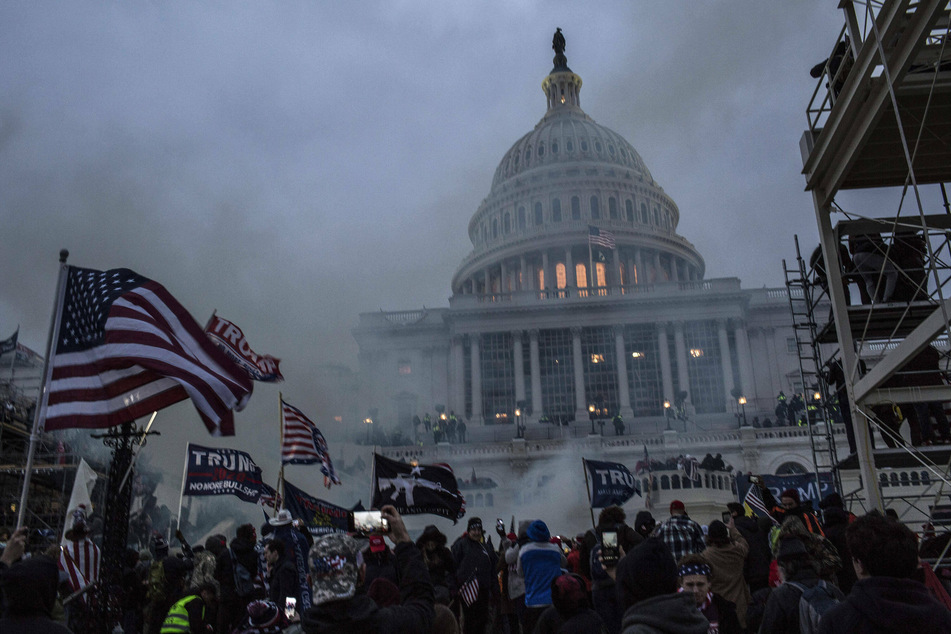 An unidentified woman who was shot at the US Capitol has died after hundreds of demonstrators breached security and scaled the steps of the iconic building.

Washington, D.C. – An unidentified woman who was shot during protests at the US Capitol in Washington has died, police confirmed to dpa, after hundreds of demonstrators breached security and scaled the steps of the iconic building.

The death was the only reported fatality during the protests, which began hours after US President Donald Trump riled up his supporters with baseless allegations of election fraud and encouraged them to march to the Capitol.

Television footage showed protesters inside the building after breaking in through a window, banging on the doors of the chambers. At least one protester was standing at the Senate dais.

The Senate and House of Representatives abruptly called off their sessions, where they had been debating Republican challenges to results in US states that Biden won in the November presidential election.

Lawmakers were evacuated as rioters marched through the labyrinthine complex and the building went into lockdown.

However, they began to return after the House Sergeant at Arms confirmed the building was secure.

The situation was fraught earlier, with tear gas and some flares being used. There were militias from multiple states and protesters flew Trump and QAnon flags from the steps of the building.

"Obviously this is not what we want to happen but it's what we need to happen now," one supporter told dpa. "Hang the traitors," another said.

The National Guard was later deployed to Washington DC in response.

In addition to the one fatality, there were injuries among officers, D.C. police chief Robert Contee said. He condemned the "unlawful riotous behavior" and said the force was "working very hard to regain control of the Capitol." He also said protestors had used chemical irritants on police to gain entry to the Capitol.

Trump, who was under increasing pressure to call on the protesters to disperse and denounce the action, asked his supporters to "go home" in a video posted to social media hours after they breached the Capitol.

"These are the things and events that happen when a sacred landslide election victory is so unceremoniously & viciously stripped away from great patriots who have been badly & unfairly treated for so long," he said in another tweet. "Remember this day forever!"

Twitter then blocked Trump's account and threatened "permanent suspension" after requiring the removal of three of his tweets citing "risk of violence" after masses of angry pro-Trump protesters stormed the Capitol.

Biden and Pompeo speak out against the violence

US Secretary of State Mike Pompeo, one of Trump's close allies, condemned the "unacceptable" storming of the US Capitol by pro-Trump supporters.

"Lawlessness and rioting -- here or around the world -- is always unacceptable," Pompeo tweeted.

"But violence, putting at risk the safety of others including those tasked with providing security for all of us, is intolerable both at home and abroad. Let us swiftly bring justice to the criminals who engaged in this rioting."

President-elect Biden said the chaos at the Capitol "borders on sedition and it must end now."

The Democrat said the world was watching. "Like so many other Americans I am genuinely shocked and sad that our nation, so long a beacon of hope and democracy has come to such a dark moment," he said in a speech.

Trump and supporters cling to baseless claims of election fraud

Washington Mayor Muriel Bowser issued a 6:00 p.m. curfew in response to the violence and urged everyone to stay home. She said this "shameful" behavior would not be tolerated and the city's police would lead the command to clear the Capitol building and reset the perimeter. Police from Virginia and Maryland were coming in, she added.

At the earlier rally, attended by protesters descending on the capital from dozens of states, Trump told the cheering crowds, "we will never concede ... You don't concede when there's theft."

"I am from Detroit and I saw the fraud. The fraud is real, the evidence is overwhelming," Ben Cushman of Michigan told dpa.

Vice President Mike Pence, who had been presiding over the joint Congress session when the building was swarmed, tweeted that the "violence and destruction taking place at the US Capitol Must Stop and it Must Stop Now."

Leaders from around the world condemned the scenes of chaos in the United States, with EU foreign policy chief Josep Borrell saying they were "not America."

Before being disrupted by the protests, Congress had come together for a joint session to certify the US presidential election. Normally a procedural affair to confirm which candidate won the presidential election, it had turned into a partisan showdown as Trump allies mounted a last-ditch effort to overturn his loss.

Some Republican lawmakers were objecting to Congress certifying Biden's victory over Trump in certain US states in a highly-unusual move.

The challenges are almost certain to be overruled, but could delay the process.

Vice President Pence, whose role is largely ceremonial and involves reading out the vote results, had come under pressure from Trump to declare him the winner of the election. But he defied Trump, saying he could not claim "unilateral authority" to reject the electoral votes of states that Biden won.

Trump lashed out at Pence afterwards, tweeting that he "didn’t have the courage to do what should have been done to protect our Country and our Constitution."