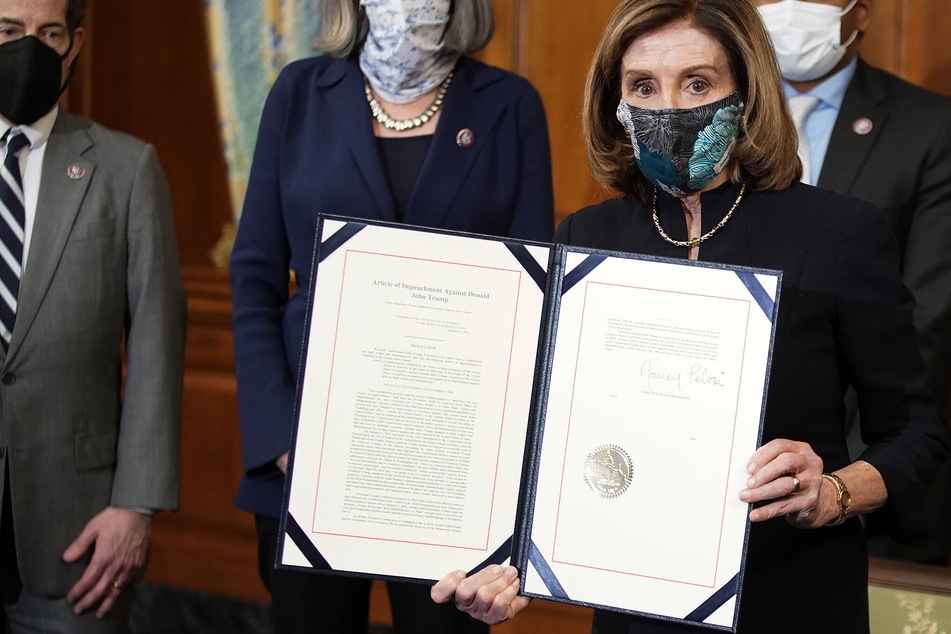 Donald Trump became the first president in US history to be impeached twice after a bipartisan vote passed in the House of Representatives.

Washington DC - The US House of Representatives on Wednesday voted to impeach Donald Trump for inciting last week's deadly Capitol siege, making him the first president in history to be impeached twice.

The outcome, which was expected, comes only seven days before Trump leaves office and Democratic President-elect Joe Biden is inaugurated.

The Democrat-controlled House charged Trump with inciting an insurrection after a mob of his supporters, riled up by his false claims of election fraud, stormed Congress and temporarily halted a joint session to certify Biden's victory.

The House impeachment means Trump now faces a trial in the Senate. A two-thirds majority is needed to convict him in the upper chamber, which is still in Republican control for now. More than a dozen Republican senators would have to find him guilty, which none have so far publicly indicated they would do.

Outgoing Senate Majority Leader Mitch McConnell ruled out a trial before Biden is sworn in as president, rejecting Democrats' calls to reconvene the Senate for an emergency session before January 19.

"There is simply no chance that a fair or serious trial could conclude before President-elect Biden is sworn in next week," McConnell said in a statement.

Although it will be too late to oust Trump, the Senate could also vote to disqualify him from running for office again, needing only a simple majority.

Trump was impeached in 2019 on allegations of abusing his position, but the Senate cleared him of charges last year.

The vote in the House came after lawmakers debated the charge for several hours in the same chamber that was evacuated a week ago as pro-Trump rioters swarmed the Capitol.

House Speaker Nancy Pelosi said it was Trump's words that sent the "domestic terrorists" to Congress.

"He must go. He is a clear and present danger to the nation that we all love," she said.

Republican lawmaker Jim Jordan argued that impeachment "doesn't unite the country" and in no way "helps the nation deal with the tragic and terrible events of last week."

Kevin McCarthy, the top Republican in the House, also argued that impeachment wouldn't help, but noted that Trump bears responsibility for the violence that broke out last week.

"The president bears responsibility for Wednesday's attack on Congress by mob rioters," McCarthy told a House debate on impeachment. "He should have immediately denounced the mob when he saw what was unfolding."

The impeachment came a day after Vice president Mike Pence rebuffed Democrats' calls to use the Constitution's 25th amendment to remove his boss from office.

Trump has remained defiant, taking no responsibility for his role in last week's assault on Congress, which left five people dead. He said on Tuesday that his speech, which seemed designed to rile up supporters, was "totally appropriate."

The impeachment article notes that Trump repeated false claims that he won the November election, while speaking at the rally moments before the rampage. He also egged on supporters to march to the Capitol.

Shortly after the vote, Trump issued a video message repeating an earlier call to US citizens not to break the law or perpetrate violence in the days leading up to Biden's inauguration.

He called on the public to "overcome the passions of the moment and come together as one American people."

"Mob violence goes against everything I believe in and everything our movement stands for," he said. Trump did not mention the impeachment vote.

Security at the Capitol has been massively ramped up amid fears of further violence surrounding Biden's swearing-in.

Thousands of National Guard troops were on Wednesday protecting the building, with social media images showing some resting in its halls ahead of the impeachment debate.