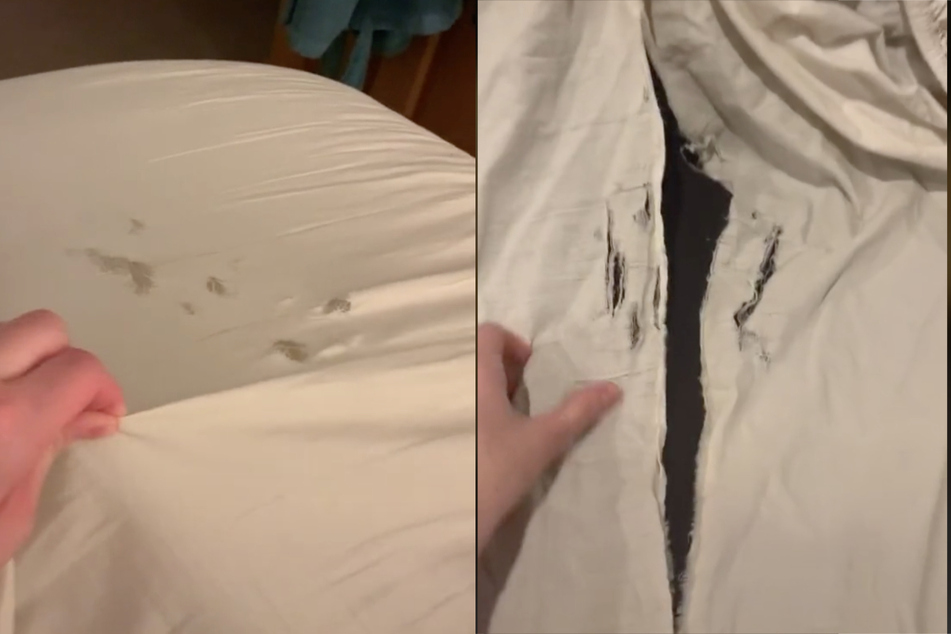 What in the world makes these kinds of holes in sheets? Someone with some questionable grooming habits.

Internet - What in the world makes these kinds of holes in bedsheets? Strangely enough, the answer has something to do with a husband's bad grooming habits.

TikTok user purplecats4me got a lot of attention when she posted a curious video of her bedsheets, which had huge tears.

The woman knows exactly what caused these weird holes. In the video, she asks viewers,  "Anyone else have this problem, where you have to keep buying new bedsheets because your husband won't clip his toenails?"

Apparently, her husband keeps shredding the sheet with his long nails while he's sleeping. Gross!

The video has one million views and a lot of comments. Most TikTok users made fun of her in the comments and doubted that the slashes really came from her husband's feet. One wrote "i'm really hoping it's a joke and u have a dog or something."

But another user was able to sympathize – she shared a very similar problem: "That's my husband he accidentally kicked me in his sleep once and my leg was literally bleeding because of his damn claws."

It's amazing how much damage one man's toenails can do. And to prove that this story isn't made up, the woman uploaded a second video that featured the great reveal.

In the second clip, the woman shows a sheet that doesn't just have holes: it's been reduced to tatters!

She wrote the caption "comments suggested he is really..." followed by a slideshow of pictures that included an eagle, a werewolf, and Edward Scissorhands.

In the end, the video reveals what all of us wanted to see, out of morbid curiosity if nothing else: the husband's mythical feet.

The clip's ominous soundtrack, taken from the Netflix show Stranger Things, had people bracing to see something truly disgusting. But the big reveal was actually a bit of a letdown: the man's toenails look alright. They are just a bit long and apparently really sharp.

Although purplecats4me only has 410 followers on TikTok, she hit the jackpot with this post, which has over 33,000 views. The comment section doesn't disappoint either.

One user asked, "How does he wear shoes?"

Another thought that the sheets, rather than the toenails, are the real problem: "I mean those are pretty long, but you might just have paper sheets."

But the woman still seems pretty unhappy with her husband's questionable grooming habits. Her second video ended with a pretty serious question: "should I still file for divorce"?