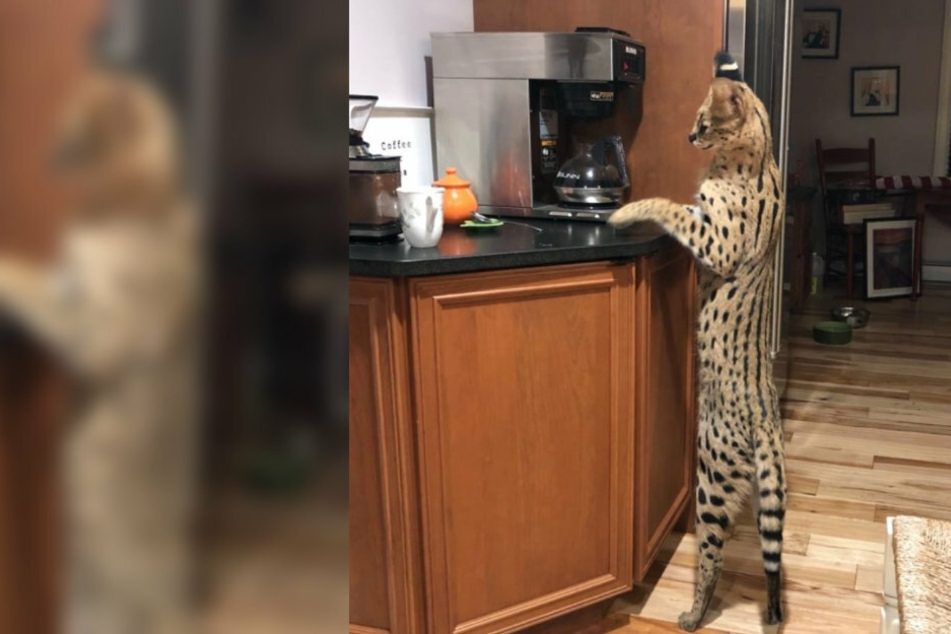 There's a wildcat on the prowl! Unusual pet runs away and is rescued by police

Police aren't usually involved when a cat runs away from home, but this was no ordinary cat.

Merrimack, New Hampshire - Residents of a New Hampshire town were shocked to find out that an African wildcat was loose in their neighborhood. And they were even more surprised when they found out it was somebody's pet.

Firefighters sometimes rescue cats that get stuck up trees, but the police rarely handles pet emergencies. Then again, this was no ordinary pet.

Lisa and Dean King are the proud owners of a serval named Spartacus. He is an African wild cat that weighs almost 40 pounds. This alarming size is one of the reasons Lisa King thought she had to call the Merrimack PD when Spartacus ran away from home.

According to the Daily Mail, at first the officers were not exactly sure what they should be looking for because they didn't even know what a serval was. Lisa showed them pictures of the animal, specifically one of him stretching up to the kitchen counter, showing just how big he really is.

Servals are wild cats native to Africa, and they are usually only found in zoos in the US. Keeping a wild cat as a pet is not legal in most states. But the Kings received a special permit after adopting Spartacus from a Florida zoo four years ago.

None of the neighbors had ever laid eyes on Spartacus, as he had always stayed on his family's property until the incident.

So why did Spartacus break out into the wild? It turns out it was all the family dog's fault: it had scared the wildcat away.

As part of their efforts to find the cat, police posted on Facebook asking residents to report any sightings of the animal. After three days, Lisa and the police were relieved to announce that the escaped Spartacus had been found and recovered. He had been trapped not far from his home, but was all right. Lisa thanked the officers for their hard work.

Shortly after the rescue, Lisa created an Instagram account for the domestic wildcat, which quickly gained popularity.  People really love the snapshot of him reaching up to the coffee maker, and some asked if Spartacus can brew a cup himself.

Serval Spartacus's is now an Insta-star

Spartacus already has more than 1,000 followers. Users are fascinated by his slender figure and unusual coloring, often marvelling at the "majestic" creature.

The Kings emphasized that not everyone can take care of a wildcat – even experienced owners like themselves needed a helping hand in this case.