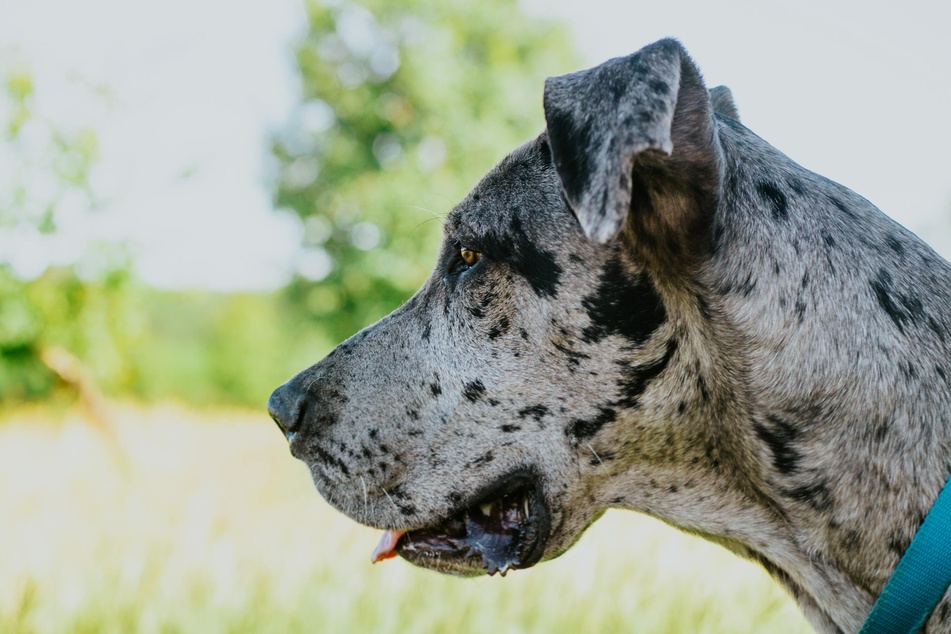 7-feet 5-inches! This is the largest dog in the world!

A true canine giant holds the record for world's biggest dog, but these other six dog breeds aren't far behind. | Read more on TAG24

UK - Freddy is a giant and he really puts the "great" in Great Dane!

Owner Claire Stoneman lives with the gentle giant and his sister Fleur, who are both like children to her, as the 41-year-old single woman told the Daily Mail.

Every year, the love and care costs her around 12,500 pounds (almost $16,500), which is about six times what most dog owners have to spend annually!

The biggest dog breeds in the world

How big is the biggest dog in the world?

Freddy, the world's biggest dog, stands at an incredible 5-feet 7-inches when he gets up on his hind legs. These measurements brought the Great Dane into the Guinness Book of World Records in 2016. Claire Stoneman doesn't mind that her baby towers over her:

"They are like children to me... They need me and it's quite nice to be needed," said the former model.

But she wouldn't mind changing her single status – but any man has to be willing to share her and the couch with the four-legged colossus.

How heavy is the heaviest dog in the world?

Freddy the Great Dane holds several other records, including the title of world's heaviest dog – he is just short of 200 pounds! That's still short of what the English mastiff Aicama Zorba La-Susa reached in 1989, when he was weighed in at an incredible 345 pounds to go with a height of just over 3 feet.

The largest dog breeds at a glance

Of course, there are other giants ruling the doggy world. Already as pups, they rival the common terrier or spaniel breeds in size. But not all of these big dog breeds are suitable as family dogs. Many were bred for certain purposes and need to be provided a special lifestyle.

As record holder Freddy proves, Great Danes really do their name justice, growing to sizes of over 3 feet and weighing up to 200 pounds. They have a long history and have been kept and bred in a way that hasn't changed much since the 16th century. Among other things, Great Danes were used as fighting dogs in raids and were also given armor to protect them in battle.

The English mastiff can be considered the ancestor of many of the largest dog breeds. Mastiffs are characterized by their strength and endurance, which made them famous as dogs suited for hunting bears, bulls, and other large game like pigs and deer. On average, they reach a weight of around 200 pounds and a height of 2-feet 6-inches. The record holder had a shoulder height of over 3 feet and a weight of more than 330 pounds.

Even if their stature can be intimidating, English mastiffs are calm and good-natured creatures.

The Kangal shepherd is, as the name suggests, a dog used for herding sheep and other herd animals. It is especially useful in areas vulnerable to growing wolf population growing, as it can defend itself actively and independently against wolf packs.

The Kangal shepherd dog can grow to over 30 inches in height and weighs more than 130 pounds as an adult.

Irish wolfhounds are among the world's largest dog breeds, reaching heights of over 30 inches and can weighing more than 120 pounds. This dog's ancestors were bred and kept in ancient Rome. Originally used as hunting dogs, nowadays wolfhounds are mainly family dogs.

The Great Pyrenee dog was originally used as a guard dog in the castles of the Pyrenees mountains, while also enjoying a career as a herding dog. Today, similar to the Irish wolfhound, it is mainly a domestic companion dog, with males reaching a height of over 30 inches and a weight of over 110 pounds. The Great Pyrenee loves long walks and must be challenged with a lot of physical activity.

The Newfoundland's history is all in its name. It comes from the Canadian province of Newfoundland, but its exact origin is still unclear.

These large and muscular dogs were used as working dogs for fishermen from the region. They are now popular rescue dogs, with experience in this area stretching back to the 19th century. With a height of around 28 inches and weighing in at up to 176 pounds, they are among the largest dog breeds out there.

As young pups, they look like little bears; as adult dogs, they serve as shepherding dogs for households and temples in Tibet and China. Tibetan mastiffs have been on the job since ancient times. With a height of up to 28 inches and a weight of over 132 pounds, the Tibetan mastiff – or Do-Khyi in Tibetan – is among the giants of the dog world.

And how small is the smallest dog in the world?

On the opposite end of the scale is the smallest dog in the world. It probably comes as no surprise to anyone that the Chihuahua holds the title. This little lady comes in at a minuscule 3.8 inches, which is about the size of a pump!