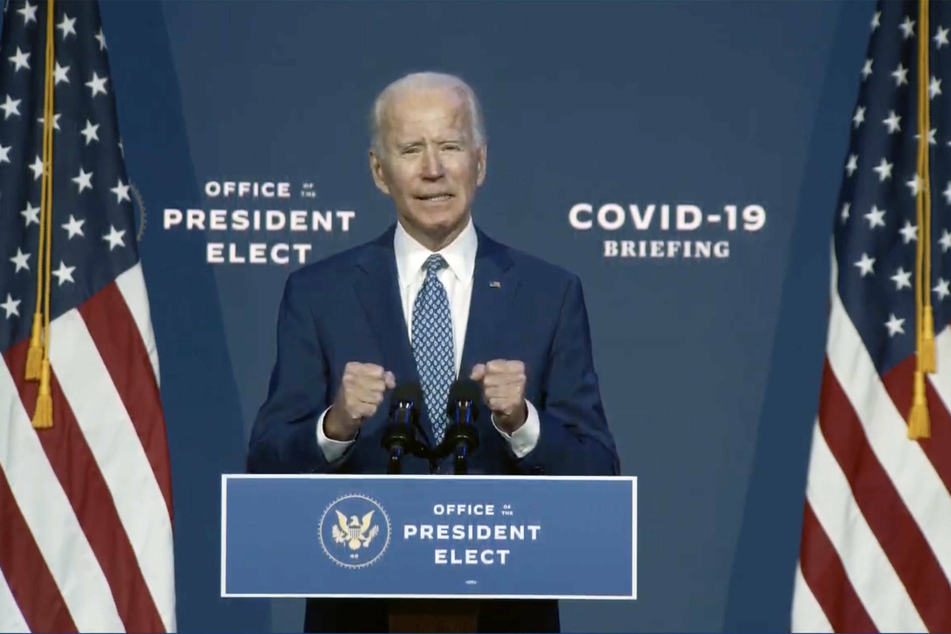 President-elect Joe Biden announced the formation of a task force to plan his response to the coronavirus pandemic, while warning of a "dark winter" ahead.

Washington D.C. - Joe Biden, the president-elect of the United States, on Monday announced the formation of a task force to plan his response to the coronavirus pandemic, while warning of a "dark winter" ahead.

In his first policy speech on the virus after he was elected president, Biden implored the public to wear face masks.

"I will spare no effort to turn this pandemic around once we are sworn in on January 20," he said, with a symbol of the office of the president-elect behind him.

"I implore you, wear a mask. Do it for yourself, do it for your neighbor. A mask is not a political statement but it is a good way to start pulling the country together," the Democrat said. "The goal is to get back to normal as fast as possible, and masks are critical in doing that."

Biden said that even with news of progress towards a vaccine, the country was "still facing a very dark winter."

He noted rising hospitalizations, deaths, and infection rates - with over 100,000 new coronavirus cases being recorded on multiple days last week.

Speaking after US pharma giant Pfizer and German firm BioNTech announced that their experimental vaccine was 90% effective in preventing Covid-19, Biden noted a vaccine would still not be widely available for months.

He vowed to push out vaccine doses "free of charge" as quickly as possible, but stressed he would "follow the science."

US continues to post record numbers of coronavirus cases

Biden promised to ensure more protective gear for medics and expand testing, but much of his speech focused on a message of mask wearing, as he urged people to stop viewing face coverings as a partisan political issue, saying they will save lives during the pandemic.

The president-elect did not take questions after concluding his remarks in his home state of Delaware.

Biden's transition Covid-19 advisory board of medical experts would guide preparations of his federal response to the coronavirus pandemic until he assumes office, according to a statement.

"The advisory board will help shape my approach to managing the surge in reported infections; ensuring vaccines are safe, effective, and distributed efficiently, equitably, and free; and protecting at-risk populations," Biden said in the statement.

The board would be comprised of scientists and public health experts and led by the doctors David Kessler, Vivek Murthy, and Marcella Nunez-Smith.

US coronavirus cases soared past the 10-million mark on Monday, according to data by Johns Hopkins University. The country has seen the highest number globally of cases and deaths, with over 237,800 virus-related fatalities in a population of about 330 million.

Trump has repeatedly falsely claimed that the country was "rounding the turn," despite evidence that it is in the grip of a third wave of the pandemic.

As Biden plots his presidential transition, Trump is still refusing to concede the election and has launched a flurry of court filings challenging the result. He has claimed electoral fraud, without producing evidence.

Mitch McConnell, the top Republican in the Senate, on Monday threw his support behind Trump's legal challenges.

"President Trump is 100 per cent within his rights to look at the allegations of irregularities and weigh his legal options," McConnell said on the floor of the Senate.

In his first public remarks since Biden was declared the winner of the election, McConnell did not acknowledge him as president-elect. Only a handful of other Republican senators have done so.

Chuck Schumer, the leader of the Democrats in the Senate, hit back that Biden won the election "fair and square," and called Trump's allegations "extremely dangerous."

The Trump campaign continued echoing the president's rhetoric, with Trump's spokesperson Kayleigh McEnany claiming in a press conference that Democrats were "welcoming fraud."

However, Fox News, a channel seen as having a conservative bent and shows that are overtly favorable to Trump, cut off the presser, saying the claims being made about vote rigging were "explosive" and the officials were not offering any proof.

"She's charging the other side as welcoming fraud and welcoming illegal voting. Unless she has more details to back that up, I can't in good countenance continue to show you this," he told viewers.

Analysts are skeptical that Trump's legal challenges could affect the outcome in any significant way, and there is no indication of widespread voter fraud, which Trump claims is behind his election loss.