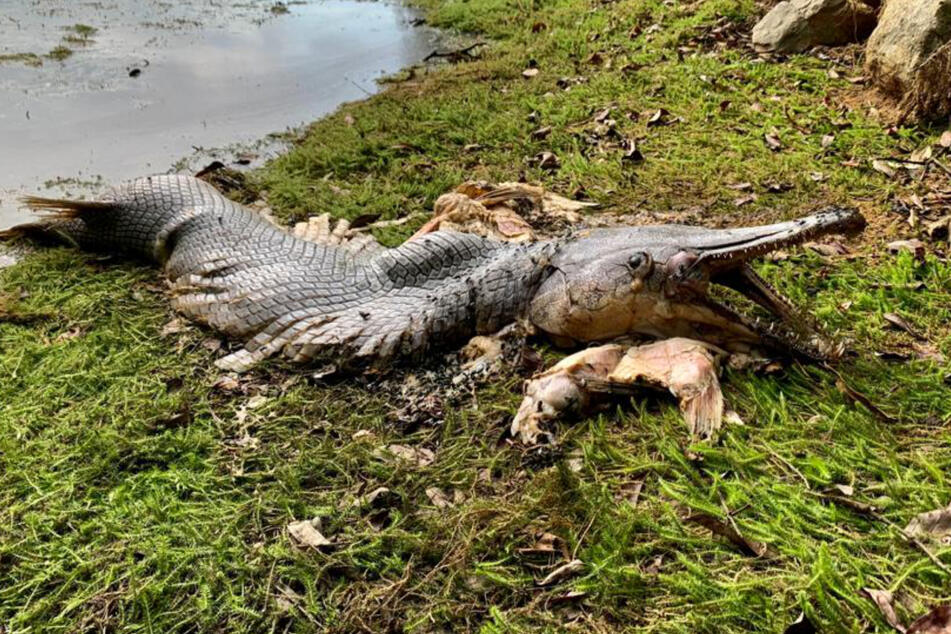 Blast from the prehistoric past? Locals baffled by mysterious creature
Feb 22, 2021 11:01 AM

Blast from the prehistoric past? Locals baffled by mysterious creature

Crocodile or fish? This carcass caused confusion in Singapore.

A bizarre carcass was spotted at MacRitchie Viaduct by local residents. Luckily, Karen Lythgoe, a member of the Singapore Nature Society, was also on hand to take a closer look.

Lythgoe told The Sun, "There were some people already looking at it from the boardwalk, but that was too far away to see what it was."

From her perspective, the animal looked like a crocodile, but "it didn't look quite right."

So the 31-year-old left the regular trail and headed towards the scene to get a closer look at the mysterious creature. When the Scot stood in front of remains, it quickly became clear that it wasn't a crocodile she was looking at.

"It was like something you might see in a zoo – it looked prehistoric with its big jaws and teeth," she told The Sun.

It's now clear what kind of animal Lythgoe photographed. Local authorities identified it as a dead alligator gar. But that only adds to the enigma.

The problem is that this species is not native to Singapore. In fact, the alligator gar is most commonly found in the American South, thousands of miles from where it was discovered.

So how did this prehistoric-looking fish get to Singapore? Officials suspect that someone bought it and then abandoned it at some point.

This is supported by the fact that alligator gar babies are on sale at local fish markets. On average, the animals are only seven to eight inches long when they are young, but they can grow up to three feet in length.

Karen Lythgoe was dismayed at the thought of this scenario: "I'm shocked someone could be so irresponsible to release that into the wild. It's a top predator so it really affects the ecosystem."

Aside from being irresponsible, releasing animals into viaducts or waterways is also a crime in Singapore, so whoever did this will probably want to stay quiet about it.