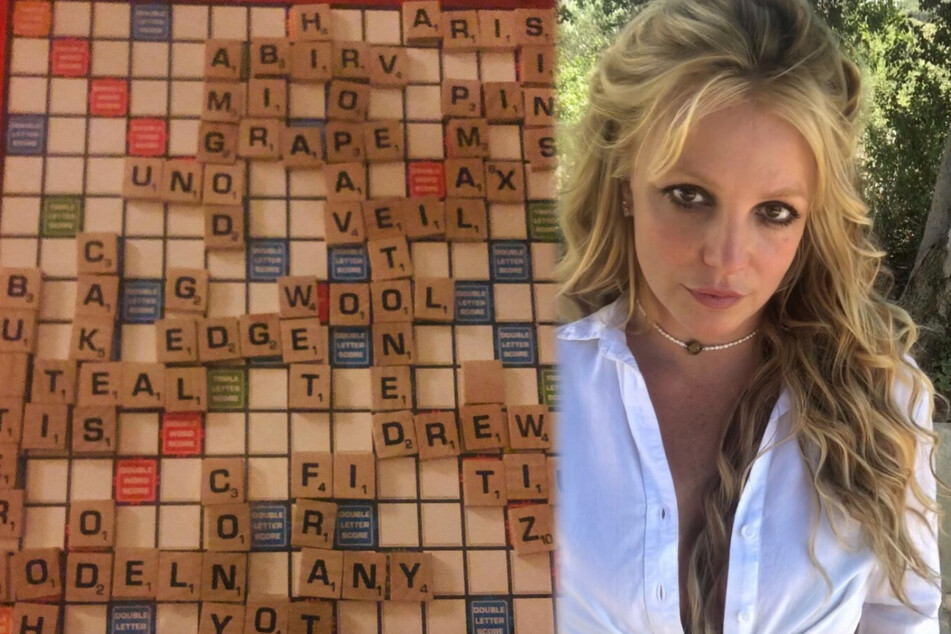 Spears' board game is playing with fans.

Los Angeles, California - Is Britney Spears sending out coded pleas for help or just playing? In a recent Instagram photo, the pop star posted a picture of a Scrabble board, further fueling conspiracy theories that she is entrapped in a battle for her freedom.

The baffling Free Britney movement has been gaining more traction lately, and her latest Instagram post asking followers to "find a word" is an added and confusing piece to the puzzle.

The 39-year-old pop sensation has been making headlines for living under a conservatorship overseen by her father Jamie Spears (68) since 2008. Celebrities and fans have claimed that the singer is not allowed to speak freely, control her own finances, or live an unrestricted life.

Now, many fans once again believe Britney is crying out for help in code. The recent Scrabble board photo features words such as "cakes," "edge," and even "sins," but also includes made-up terms with no clear meaning, such as "sodeln" or "abirv."

Under the post, Spears writes: "Can you find a word that isn’t actually a word ???? Sometimes it’s fun to make ones up!!!!!"

"Please someone crack the code, she’s trying to tell us something," writes just one of thousands of similar comments. Another said, "Find. The. Clue."

Fans and celebrities continue to fight for Britney Spears' freedom

Whether the terms in the Scrabble post actually contain a hidden message from the star – or possibly even a cry for help – is impossible to say for sure.

Spears does not respond to any of the comments on her posts, which has led some to believe she does not control her social media accounts. Often, Instagram users express their concern and support for the her well-being, with frequent comments like, "Are you ok Britney?" and "We love you queen."

The speculation over Britney's posts and her recent lack of performances and public appearances has been furthered by the media. The New York Times released a film in February called Framing Britney Spears, which addressed the issues surrounding Spears' conservatorship. It broke viewing records in the first 24 hours after its release.

Spears was able to achieve a partial victory in her last few court appearances, in which a judge added a third-party conservator ensuring that her father would no longer be making the sole decisions about her personal and financial affairs.

Yet, many think this is not enough. Countless celebrities like Paris Hilton (40), Miley Cyrus (28), Gwyneth Paltrow (48), and Sarah Jessica Parker (55) have come out in support of Britney's freedom and mental health.

With this latest Scrabble board message, the Free Britney movement is still a guessing game.