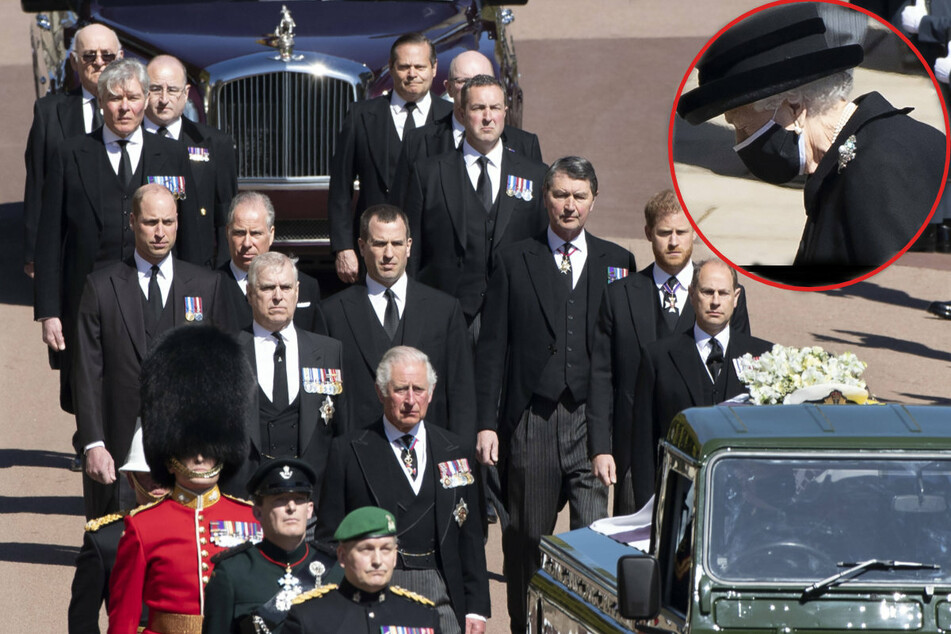 Britain's Prince Philip was interred in the royal vault of St George’s Chapel in Windsor at the end of a funeral service attended by just 30 mourners.

Windsor, UK - The coffin of Britain's Prince Philip was interred in the royal vault of St George’s Chapel in Windsor at the end of a funeral service that featured just 30 mourners on Saturday.

Queen Elizabeth II, his wife of 73 years, was forced to sit alone during the service due to the strict coronavirus regulations in place in England.

The prince, who was also known as the duke of Edinburgh, was laid to rest just over a week after he died aged 99.

The queen's expression was not captured by the television cameras during the service.

However, photographers who were permitted to take pictures prior to the start captured the queen, dressed in all black, sitting in her own in a pew and gazing at her husband's coffin.

Other members of the royal family appeared somber during the service.

Several of the royals read the order of service throughout funeral, while others were seen staring into the distance.

Each member of the royal family - and the specially chosen guests - all wore formal black clothes and black face masks and were spread around the chapel to comply with restrictions.

Relationship between Harry and William under scrutiny

After the service, the queen left the chapel with Archbishop of Canterbury Justin Welby and was followed by heir-to-the-throne Prince Charles and his wife Camilla, duchess of Cornwall, outside.

Prince William and Prince Harry also reunited seen walking together and chatting after the service.

It appeared their conversation was relaxed, with Prince William maskless as they walked while Prince Harry kept his on.

While the duo have faced difficulties in their relationship over the last few months they appeared to be friendly to each other at the service.

Questions were raised after Buckingham Palace confirmed the pair would be separated by their cousin, Peter Philips, during the funeral procession.

However, a spokesperson declined to comment if the procession reflected their relationship.

Details of the events after the funeral, and whether the family will have a wake – of which up to 15 people are allowed under current laws – have not been made public by Buckingham Palace.

It is expected that Prince Philip's German relatives, who flew in for the service, and Prince Harry will fly home later on Saturday under England's coronavirus rules.

A total of 30 people were only allowed to attend on Saturday and the public was urged to stay away from Windsor.

The guest list consisted of the queen, the couple's four children, eight grandchildren, the queen's niece and nephew, and three of her cousins.

In addition, the prince's German relatives Bernhard, Hereditary Prince of Baden, Prince Donatus, Landgrave of Hesse and Prince Philipp of Hohenlohe-Langenburg, the Countess Mountbatten of Burma, a close friend of Prince Philip, and some of the spouses of the queen's children and grandchildren were in attendance.

Meghan, duchess of Sussex and Prince Harry's wife, watched the service from the couple's Los Angeles home as she was not allowed to fly due to her pregnancy.

Prince Philip was entitled to a state funeral due to being the monarch's consort, however, he rejected it for military-style service to reflect his time served in the British Navy during the Second World War.

Buglers and seafaring hymns featured in the service while members of the Royal Navy senior service, the Royal Marines, and the Royal Regiment of Scotland lined the castle grounds to pay honor to the prince during the procession of his coffin.

The prince also had his own hand in the service, requesting certain prayers to be read and for his coffin to be brought to the chapel in the Land Rover Defender which he spent 18 years modifying.